2017-18 saw the Chorus presenting ten concerts in Halifax, Manchester, Edinburgh, Middlesbrough and Sheffield, ending the season with a mini-tour in France. We sang with the Manchester Camerata, Bruckner Orchester Linz, three other Yorkshire choirs and the world famous Black Dyke Band. We were joined by a wealth of solo talent, including acclaimed organist Jonathan Scott, and award-winning mezzo soprano Anna Harvey, who was born in Sheffield. A highlight was singing Mahler’s magnificent Resurrection Symphony on a mini tour of Edinburgh, Middlesbrough and Sheffield with the wonderful Bruckner Orchester Linz; critics described performances as ‘rousing‘, outstanding‘ and ‘gripping‘; read them here.

The chorus presents the world premiere of Philip Wilby’s new oratorio for three choirs, orchestra and organ, with the Halifax Choral Society and the Yorkshire Youth Choir under the baton of Jonathan Pryce-Jones. Commissioned by Halifax Choral Society to celebrate their 200th anniversary, the work was written for orchestra and brass band accompaniment, and the three choirs have recorded it with the world-famous Black Dyke Band. More details (preface from the vocal score).

We join forces with the Black Dyke Band for the seventh year running for an intimate, heart-warming festive concert of carols and yuletide favourites. Take the whole family and sing along to beloved Christmas music including ‘O Holy Night’ and ‘Away in a Manger’, as well as some more contemporary choices, with world-class performers in the atmospheric setting of the Irwin Mitchell Oval Hall.

One of the most celebrated brass bands in history, the Black Dyke Band have toured the world to critical acclaim, won national and international competitions year after year and collaborated with a diverse range of famous musicians. Conducting them will be their esteemed Director of Music Dr. Nicholas Childs.

Hosting is broadcaster and horn-player Tom Redmond, whose irrepressible passion for music and experience presenting diverse concerts around the world promises to bring a unique sparkle to an irreplaceable fixture in Sheffield’s festive calendar.

The Chorus again takes part in a world premiere, this time of Welsh composer Paul Mealor‘s new work ‘Paradise’, which will be presented in Manchester with the world-famous Black Dyke Band as part of the prestigious RNCM Brass Band Festival. Paul Mealor came into the public eye when his motet ‘Ubi Caritas et Amor‘ was performed at the Royal wedding in 2011, and Chorus and Band will be recording ‘Paradise’ for what is likely to prove a very popular new CD to be released later in the year.

Review of Paradise: Chorus on journey to Paradise

Jean-Claude Picard, a young conductor praised for the intensity and flair of his performances, directs the  Manchester Camerata and Sheffield Philharmonic Chorus in Mozart’s great Requiem. Unfinished at the composer’s death, it was completed by a star pupil; its origins are somewhat shrouded in mystery and intrigue. But whatever those origins really were, it remains a profound musical experience for audiences and performers alike. The four wonderful soloists include Sheffield-born Anna Harvey, a prize-winning mezzo soprano hailed as ‘simply wonderful’ by the New York Times and ‘remarkable’ by the Times.The lighter side of Mozart is in evidence in his beautifully buoyant ‘Linz Symphony’. He wrote it in just a few days while passing through the Austrian city of its title. The concert opens with Arvo Pärt’s Da Pacem Domine for strings, based on his great choral prayer for peace, a work of serenity and quite astonishing beauty. 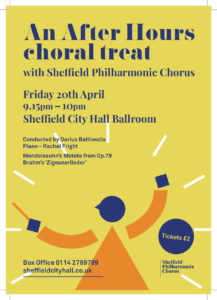 The Chorus provides an extra choral treat to those attending the orchestral concert in the Irwin Mitchel Hall, by presenting a short ‘After Hours’ concert in the beautiful City Hall ballroom immediately after the main concert, accompanied by the Chorus’ new accompanist Rachel Fright on piano. The programme will continue the theme of German romantic music established in the main concert and will include ‘Zigeunerlieder’, a charming set of gypsy songs composed by Brahms in 1891, and Mendelssohn’s beautiful ‘Sechs Spruche’, six songs relating to key liturgical festivals.

Markus Poschner, the Bruckner Orchester Linz, soloists and the joint forces of the Sheffield and Leeds Philharmonic Choruses perform Mahler’s truly epic ‘Resurrection’ Symphony. It promises to be an unforgettable experience.

The highly dramatic first movement portrays a superman’s titanic struggle with fate. The second and third movements offer contrast, the text of the latter describing St Anthony’s sermon to the fishes. Then, as the orchestra falls silent, the alto soloist enters in magical fashion, the voice of religious faith. Finally, voices, orchestra and organ combine in what could well be the most awe-inspiring vision of redemption and re-birth in all music.

The performance in Sheffield is the culmination of a short tour, with concerts in the Usher Hall Edinburgh on Sunday 29 April, and the newly-refurbished Town Hall in Middlesbrough on Tuesday 1st May 2018.

The season concludes with a return to the beautiful City Hall ballroom for a presentation of Rossini’s wonderful ‘Petite Messe Solennelle’, with acclaimed organist Jonathan Scott on harmonium, and the chorus’ previous accompanist Nigel Gyte on piano. The concert will include a solo piece for harmonium, together with a short talk about the instrument from Jonathan Scott.

Report  and Review of Rossini concert: