In 2018 the Chorus was thrilled to receive an invitation from the world famous Black Dyke Band, to record Paul Mealor’s beautiful new work Paradise in Sheffield’s own City Hall. The recording has now been published as part of the Black Dyke Gold series and is available for purchase on the Black Dyke Band website. 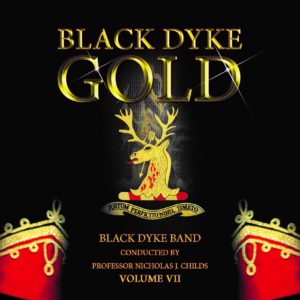 Paradise features two elements sung by the Chorus alongside the band, sandwiching a central section of fiendish difficulty that the band use to showcase their virtuosity. Other works on this fabulous CD include Gounod’s beautiful Ave Maria and Sousa’s rousing Liberty Belle.

The Chorus first sang Paradise with the Black Dyke Band on Saturday 27th January 2018 at the annual Brass Band Festival. This prestigious ‘everything brass’ event is held each year at the Royal Northern School of Music in Manchester, and many performances, including the beautiful Paradise, were recorded for BBC Radio 3 and are available on the Radio 3 website.

Paul Mealor first sprang to fame in 2011 when his Ubi Caritas was featured at the wedding of His Royal Highness Prince William to Catherine Middleton, now TRH The Duke & Duchess of Cambridge. Born in North Wales in 1975, Paul studied composition privately as a boy and then at the University of York and in Copenhagen. His music has been commissioned and performed at many festivals and by numerous orchestras and choruses and has been broadcast on TV and radio throughout the world.

Fantastic to see 140 of us together on-line for our first virtual rehearsal last week! Really really enjoyed it despite the limitations. Roll on the next one - on Tuesday 14 July at 7pm. #LetTheMusicPlay

We warmly welcome the significant support package announced by the government to protect arts venues both large and small. Thank you @OliverDowden and @DCMS for listening to the concerns of the sector. Onwards and upwards! #LetTheMusicPlay #SaveOurVenues

All Jonathan's concerts have been a joy to listen to - this one will be as well we're sure! @ClassicalSheff