Darius Battiwalla has been music director for Sheffield Philharmonic Chorus since 1997. In addition to preparing the choir for concerts with visiting orchestras and conductors including Mark Elder, Gianandrea Noseda, Nicholas Kraemer, and Paul Daniel, he has conducted the chorus with the Halle, Royal Liverpool Philharmonic and Northern Sinfonia, and directed from the harpsichord with the Manchester Camerata. Performances have included Britten’s St Nicholas, Vaughan Williams’ Sea Symphony, Poulenc’s Gloria and Fauré’s Requiem, Handel’s Messiah and Bach’s B minor mass and St.John Passion.

Since he took over as music director, the choir has performed from memory for the first time, and has appeared at the Proms and on recordings for Chandos with the BBC Philharmonic, including the newly reconstructed score of Elgar’s Crown of India with the BBCPO and Sir Andrew Davis for Chandos Records. Darius has led the choir’s collaboration with Black Dyke Band in a series of recordings in the band’s Black Dyke Gold series, and in a CD of Christmas music including a number of his own arrangements. 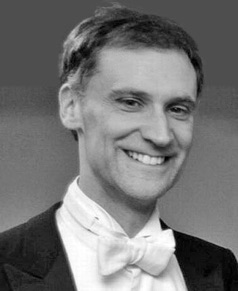 In 2006 Darius returned to work with the Melbourne Chorale, conducting Verdi’s Requiem in the Hamer Hall. Before taking up his post at Sheffield he was chorus master of Leeds Philharmonic Chorus. He has worked regularly as guest chorus master or conductor with many other choirs including the Northern Sinfonia Chorus, Lucerne Festival Academy, Leeds Philharmonic Chorus Huddersfield Choral Society, CBSO chorus and Netherlands Radio Choir, with whom he has specialised in contemporary music, having prepared them for works by Berio, Boulez, Ligeti, and the premiere of Stockhausen’s EngelProzessionen. In 2014 he worked with the Lucerne Festival Academy in preparation for a performance of Berio’s Coro to be conducted by Simon Rattle, and in 2018 was guest chorusmaster for the Northern Sinfonia for Paul McCreesh. In 2019 he conducted the BBC Philharmonic in a CD of music for the BBC Young Choristers of the Year.

Darius was recently appointed Leeds City Organist, performing regularly in the highly successful recital series in Leeds Town Hall, and has given organ recitals at cathedrals and concert halls throughout the country, as well as recordings and broadcasts on radio 3. He has given the recitals for the Royal College of Organists’ and Incorporated Association of Organists’ annual congress, appeared as soloist and orchestral organist and pianist for the BBC Philharmonic and Halle orchestras. 2019 saw the premiere of a new work for organ and brass band with the Black Dyke Band, a performance of Karl Jenkins’ organ concerto at the Bridgewater Hall, solo recitals in Leeds, York and London, and a live broadcast on radio 3 of Janacek’s Glagolitic Mass.

Darius also improvises for silent films on both organ and piano, including a regular silent film series at the National Media Museum. Over the past ten years he has improvised scores to more than fifty silent films on both organ and piano, not only in cinemas but in churches and cathedrals throughout the country, as well as a regular series for the National Media Museum. His improvised score for Phantom of the Opera at the RNCM in 2017 was described by theartsdesk.com as a ‘magnificent example of musical creativity…..a real multi-media achievement.’

Darius was born in London and started playing the piano at an early age, followed by the cello. He began playing the organ at St Mary’s Islington at the age of 13. He was educated at Leeds University and the Royal Northern College of Music where he won prizes for both organ and piano accompaniment.