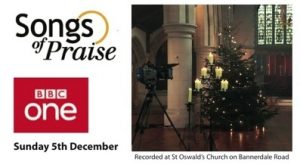 s very own Philharmonic Chorus will take centre stage on BBC One on Sunday 5th December. They will feature in a choral edition of the BBC’s flagship religious programme, Songs of Praise, singing four Christmas carols, some with a distinctly Sheffield slant.

The Christmas Songs of Praise will not only net them their largest audience to date but will be particularly close to their hearts due to an unusual Sheffield connection. There is a tradition of mass singing in some of the pubs in North Sheffield and North Derbyshire, which takes place in the second half of November and throughout December, and which is often referred to as ‘The Sheffield Carols’. These events have been described as one of the most remarkable instances of popular traditional singing in the British Isles, and featured in broadcasts last Christmas on both BBC Radio 2 and 3. The Sheffield carols Hark, hark what news and Christians awake will form part of the Chorus’s Christmas programme, bringing a unique local flavour to the event.

Choirs often find themselves singing festive music rather earlier than most due to having to rehearse in the months leading up to December. Songs of Praise kept this tradition alive by being recorded way back in October. “It was all quite exciting” said Jo Briddock, a 2nd alto who has sung with the Chorus for ten years. “We got our best choral glad rags on, made sure we knew the music inside out, then sang our hearts out next to a rather splendid Christmas tree….in October”, she laughed. “But I must say that St Oswald’s on Bannerdale Road was a wonderful venue, most atmospheric and with glorious acoustics”.

The Chorus’s 75th Anniversary season has already seen them perform Elgar’s Dream of Gerontius – to high acclaim – and this will be closely followed by two Christmas Concerts, at the City Hall on Sunday 12 December. Mozart’s ever popular Requiem will follow on Friday 25 February 2011 and a performance on 3 June 2011 of Walton’s Henry V with their Patron, Samuel West. They will also be joining their colleagues of the Leeds Philharmonic Chorus for a performance of Verdi’s Requiem in Leeds Town Hall on Saturday 21 May 2011. With a DVD due for imminent release of the first recording for brass band and Chorus of Karl Jenkins’ The Armed Man it seems their 75th Anniversary year will certainly be one to remember.

Huge thanks to @MinC_Sheffield who are keeping the #gardengigs going and providing inspiration to our young musicians. https://twitter.com/MinC_Sheffield/status/1243232685448933379

Today we are featuring 3 of our wonderful Percussionists, Matthew Rigg, Logan Hartley, and Gareth Hand, giving you their rendition of "The Two Imps" 👹

What a gorgeous sunset at Royd Moor, Millhouse Green. Lovely photo by Ian Dunkley, loving where he lives #Sheffield